The Boeing French Team aims to promote the French aerospace industry players actively involved in the Boeing programs as innovative and reliable suppliers.

“We are committed to go together towards performance and excellence”-confirms Mr Fron, Managing Director – Boeing France.

“When a leader like Boeing selects our products against all the competition, it’s the recognition of work, and somehow a benchmark against what the competition can do”,- asserts Mr Arragon, CEO, Crouzet.

When Boeing started development of the 737 MAX, the aim was to deliver superior design, efficiency and safety to customers by using the most advanced technology from nose to tail: new engins, new windlets, new fight deck displays and the passenger-preferred interior.

The landing of this aircraft uses a number of means to come to a stop with two of the most important being the mechanical brakes and jet engine thrust reverser. The thrust reverser is considered critical for safe operations as it helps to slow down the aircraft just after touch-down, reducing wear on the brakes and enabling shorter landing distances. To avoid accidents involving thrust reversal systems, Boeing selected Crouzet to provide the proximity switches to monitor the positions of the electric thrust reverser lock system on the 737 MAX.

“Our French partners have played a leading technological role in the huge success of the 737 program“ said Yves Galland, President of Boeing France.

We are happy to be recognized by Boeing as a premium provider of detection and sensing components for the new Boeing 737 Max. Further cooperation between two companies is going on. Currently, Crouzet is developing another range of proximity switches for Boeing’s new fixed wing program-777X.

Through innovative design we deliver reliable components to the most severe aerospace environments. Applications include: 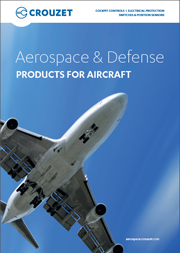